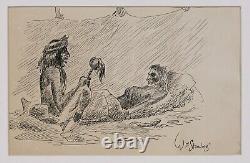 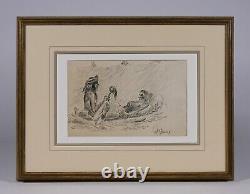 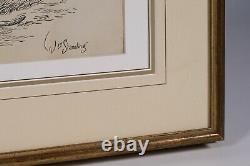 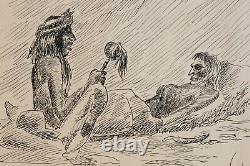 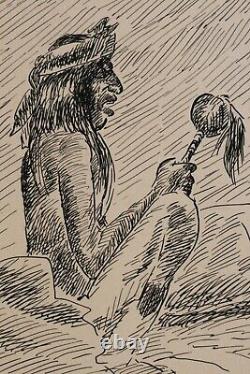 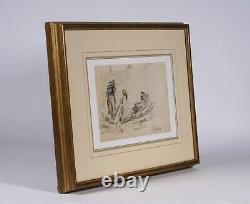 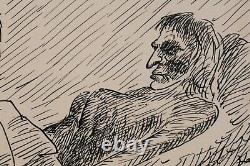 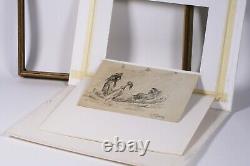 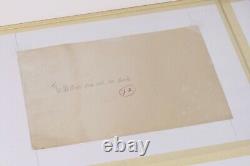 Signed by the artist, on the front, lower right Wm. Titled on the back by the artist in pencil, "The Medicine man and the dead".

DRAWING - 7" x 10 3/4". FRAME - 14 3/4" x 19 1/2". This drawing was made to be used as an illustration in the important WPA commissioned book, "LAND OF NAKODA : The Story of the Assiniboine Indians", written by James Long and illustrated by William Standing.

This original drawing appears as an illustration in the book. The original edition of "LAND OF NAKODA" was published in 1942 by the State Publishing Company, in Helena, Montana. The first edition is quite rare and the book was reprinted in 1972 by AMS Press. This book, and especially Standings depictions of Assiniboine Indians in the course of daily activities, is considered important as an accurate cultural record of Plains Indian life as it was in the old days.

This pen and ink drawing illustrates a Nakoda-Assiniboine Medicine Man sitting in a lodge with a dead woman. He is singing and shaking his rattle in a death chant to help the woman transition to the hereafter. The image depicted is very much in the style of the great Western artist, Charles M.

Russell, who influenced Standing and many of his contemporary Native American artists. The pen and ink drawing is not laid down or mounted. Overall yellow toning and a toned line to the very right.

The paper is medium weight and a paper conservator could successfully remove the toning, inexpensively. The frame and mat are contemporary and in good condition.

From a Portland, Oregon estate collection. William Standing, a Nakoda Indian, was born in 1904 on the Fort Peck Indian Reservation, near the settlement of Oswego, Montana. Standing reported that he had been drawing and modeling in clay from the early age of six. When as a small, unruly child, William was in need of discipline, his mother drew the face of an evil spirit on the bottom of a pan and set it in a corner of the room to frighten her son so that he would behave.

I found the pan and erased the ugly face. With wood ashes, I drew a more kindly one, William recalled. His first attempt at a formal work was in 1916 and his formal education began in the boarding school of the Presbyterian Mission at Wolf Point, the elementary schools of the Fort Peck reservation, and culminated at the Haskell Institute in Kansas from 1920 to 1924. Of his painting, Bill Standing said, I like to be what is called an independent artist and draw and paint what I see. In the later 1930's and the early 1940's, the Federal Writers Project in Montana selected and employed an Indian on each of the state's reservations to research and to write an account of his own tribe.

James Long was selected and his work was published under the title of "Land of Nakoda: The Story of the Assiniboine Indians" by the State Publishing Company in Helena, Montana, in 1942. William Standing executed numerous pen and ink illustrations for the book. This volume, an in-depth sketch study of the Assiniboine tribe, is the focal point of the greatest body of Standing's works.

Mostly done from first hand accounts from tribal elders, these sketches provide a link to traditional coup accounts to modern Native American Art. According to one woman who worked as an artist during the WPA in Great Falls, she said that she knew William Standing and that one of her tasks was to clean his brushes. Standing was considered one of the star artists in the program.

The woman further related, He had been taken to Washington where he was presented to President Hoover with a grand headdress of eagle feathers. This was considered as being quite comical as the headdress was not Assiniboine. William Standing died in a car accident on June 27, 1951 at the age of forty-six. He was driving a 1949 Chevrolet and at the scene of the accident, on highway 19 near the town of Landuskusky, Montana, state troopers reported they found 300 feet skid marks. This piece will be a quality addition to any collection of Native American Art and will display beautifully in any Western, Tribal, Southwest, Art Deco, Santa Fe - Taos Style, or Arts and Crafts decor.

This object comes from a smoke-free, pet-free environment. This item is in the category "Antiques\Ethnographic\Native American". The seller is "antiques-art" and is located in this country: US. This item can be shipped worldwide.