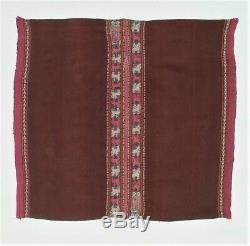 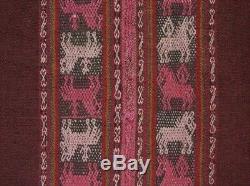 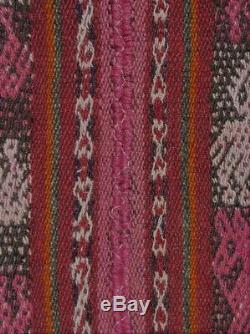 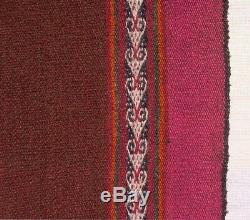 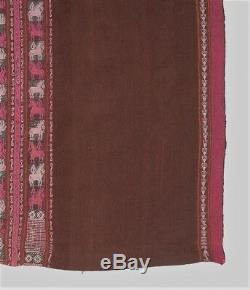 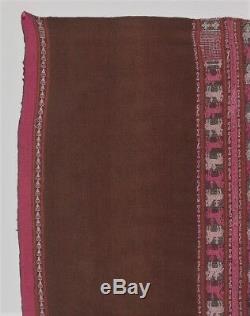 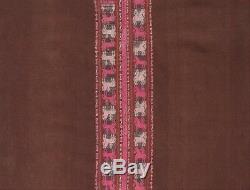 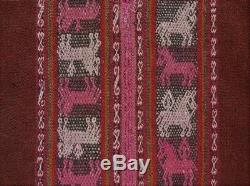 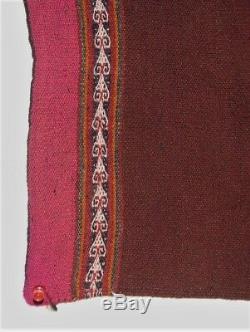 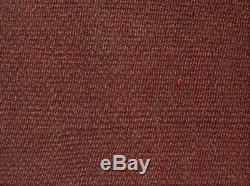 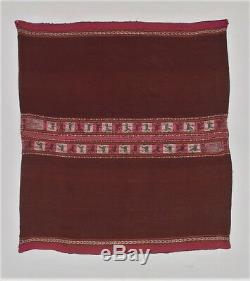 They were first subdued by Aymara warlords, later by the Inka (Inca) Empire and finally by the Spanish who subjected men and boys to the mita system of forced labor in the silver mines of Potosí. Today most Indians in the region speak Aymara, Quechua and Spanish, in order of importance and frequency. This special offer consists of an authentic indigenous Native American hand-woven awayu shoulder cloth of historic age in excellent condition. The awayu is warp-faced, constructed in two identical parts and connected by a common center seam.

Each half has four-edge selvage. Weaving the piece utilized a prehistoric-style provisional loom. Upon completion of the weaving, the loom reverted to a bundle of loose sticks.

This sequence of throwing the warp yarns on the end loom bars required perfect coordination between two people the weaver and a relative or friend. The two individuals dealt with two balls of yarn. Each person threw the red yarn twice then the brown yarn once over and under the loom bars. This resulted in a uniquely colored burgundy brown field unlike any single-colored yarn could produce. There are two central bands in thick pebble weave with patterns of horses and riders occupying tukapu squares.

Inca textiles of the 15th and 16th centuries commonly contain repeated tukapu squares or rectangles with different colored backgrounds. Many of the riders carry representations of large feathered arches, sometimes carried in ceremonial dances. A warp count of about 54 per inch and a weft count of 16 per inch denote a very fine textile.

The awayu is thin, soft and supple. It weighs only 681 grams. Except for some historic light repair along the center seam, the weaving is in superb condition and displays beautifully.

The weft yarns are fine, plied light and dark, natural llama wool. Approximate Size: 41 inches by 37 ½ inches. Condition: EXCELLENT, used and repaired condition. The attractive fuchsia colors were once pink but have faded with age and exposure; the other colors have also pleasantly faded or muted. A single tiny worn spot in the field is difficult to detect.

There is light fraying on one end. The center seam displays two sections with old, native repair.

Any light fogginess in the photos is due to reflective sheen of the wool. Please refer to the photos and the ANDESAMAZON TEXTILE "CONDITION" TERMS. The disadvantage is that items will not arrive quickly. Items to the United States of America have arrived in as few as ten days. Our offices are not in close proximity to international postal service. We promise to continue providing detailed and accurate information related to age, origin, condition and descriptions as we have for the past 20 years. PREHISTORIC, PRE-COLUMBIAN, ANCIENT = Before around A. 19th CENTURY = 1800 to 1899. TURN-OF-THE-19TH-CENTURY = 1890 to 1910. EARLY-20TH CENTURY = 1900 to 1933. MID-20TH CENTURY = 1934 to 1966. LATE-20TH CENTURY = 1967 to 1999. TURN-OF-THE-20TH-CENTURY = 1995 to 2005. EARLY-21ST CENTURY = 2000 to Present. ANTIQUE = Over 50 years old. VINTAGE = Over 30 years old. CONTEMPORARY = Made in the last 5 years. CIRCA = Approximately/around/within a few years of. ANDES AMAZON TEXTILE CONDITION TERMS. Terms used to describe the physical condition of textiles can be subjective and vary greatly from one observer to another. What some others call mint condition, we call good; what others call excellent condition, we call fair. Following are explanations of the terms we use.

Unused -- as if recently removed from the loom. No wear or patina of any kind.

The colors may have muted ever so slightly due to age or exposure, often improving the beauty of a textile. VERY GOOD = Usually lightly or only periodically used. The surface may be very lightly but evenly worn. There are no tears or distracting holes. There may be minimal surface discoloration.

Edges may be lightly frayed. Surface discoloration due to age and exposure is common but often improving the appearance of a textile.

In most 20th century cases, the colors have considerably faded. Sections of fringe or tassels may be missing. Textiles may be in otherwise excellent condition but with a single isolated sector of damage, that greatly reduces its aesthetic appeal. Most vintage tribal textiles on the market are in FAIR TO GOOD condition. POOR = Showing evidence of extreme usage and damage. These textiles do not display well and are primarily useful as study specimens or examples of sometimes very rare textiles. We believe the world can be a better place. We believe that humanity has a higher, aspiring destination. We know that through mutual respect conflicts will subside.

As stewards of the human race, we have an intrinsic responsibility to do what we can to improve our world as much as possible. The majority of human existence has been dominated by so-called Native groups, also known as tribal folk, original residents, indigenous people, aboriginals, First Nations, traditional ethnicities, autochthonous societies, autochthonal cultures, et.

At some point, of course, our ancestors were the same regardless of current culture, creed or color. Regrettably, in the past half a millennium, thousands of unique tribal groups have disappeared due to misunderstanding, impudence and ethnocentrism. The direct and circuitously destruction of myriad native cultures, each a once-valuable resource to our planet, is due to uncontrolled aspects of colonialism, capitalism, racism and politicization. Of the nearly 7000 languages currently spoken on our planet, over 6000 are in immediate danger of becoming extinct.

The vast majority of those are ethnic indigenous. We believe in cherishing and carefully supporting the very few Native groups that remain on earth. Unfortunately, we are on the brink of losing our connection with indigenous spirit, wisdom and traditional knowledge.

This holistic approach to understanding indigenous material culture shall include accompanying photographs, films, recorded testimonials, music, related specimens and even field notes. We want to inspire our visitors to continue their own investigations into realms of mysterious phenomena that we really know very little about. Apart from receiving monies for researching indigenous material culture, our sales contribute toward expanding interest in past cultures and ways of life. Not only can beautiful and interesting objects enhance ones´ personal environment, but they can also provide invaluable knowledge regarding different ideologies, unique ways of life and past or nearly extinct traditions.

We hope that you share with companions, friends and especially children whatever understanding, knowledge and insights you obtain from our objects. In this small way, we feel inspired in preserving something of native cultures and making the world a better place.

Thank you for working with us. THANK YOU FOR YOUR INTEREST AND SUPPORT. The item "VISUAL MASTERWORK SPECIAL ANDEAN INDIAN Antique Aymara Llama Wool Mantle TM12828" is in sale since Tuesday, August 14, 2018. This item is in the category "Antiques\Ethnographic\Native American". The seller is "andesamazon" and is located in Santa Cruz, .