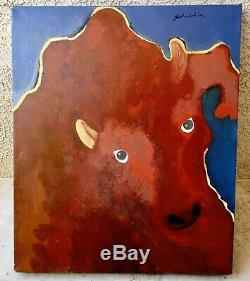 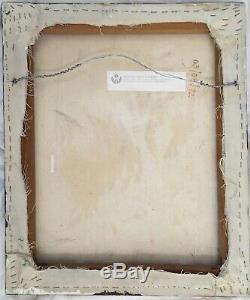 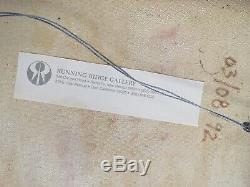 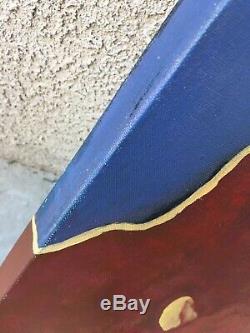 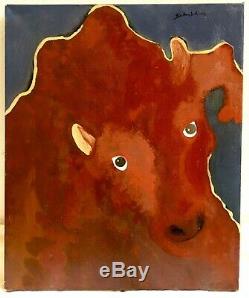 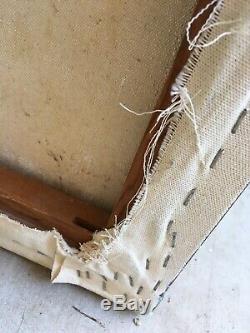 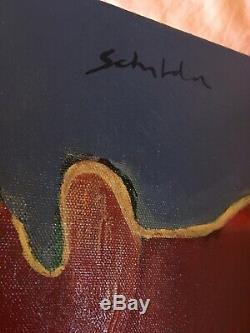 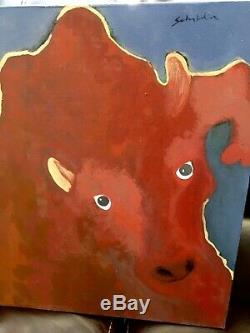 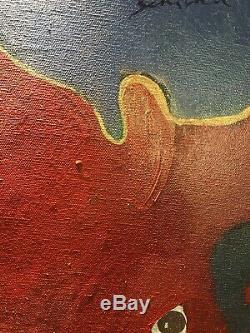 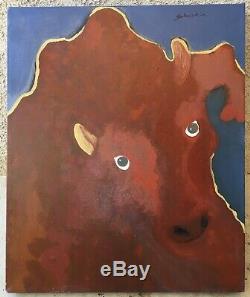 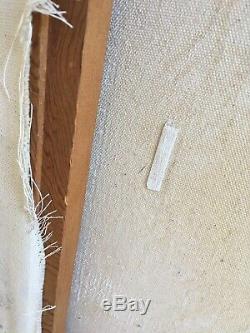 You are looking at a beautiful, large mixed media/oil painting , signed, Scholder. Large, Beautiful painting, has bright colors and details. Subject matter is of a beautiful Bull. The artwork is painted on a hand stretched canvas, that is very thick in profile.

FEEL FREE TO MAKE AN OFFER! This Santa Fe style painting would be a great add to any important collection. Verso: Running Ridge Gallery, Canyon Road Santa Fe, New Mexico. This is not a lithograph, print or etching.

There is no direct provenance or history of ownership papers. Most of the art here, is found at estate sales. Born in 1937 in Breckenridge, Minnesota, Fritz Scholder knew what he must do at an early age. As a high school student at Pierre, South Dakota, his teacher was Oscar Howe, a noted Sioux artist.

In the summer of 1955, Scholder attended the Mid-West Art and Music Camp at the University of Kansas. He was voted Best Boy Artist and President of the Art Camp. He studied with Robert B. In 1956, Scholder graduated from Ashland High School in Wisconsin and took his freshman year at Wisconsin State University in Superior, where he studied with Arthur Kruk, James Grittner and Michael Gorski. In 1957, Scholder moved with his family to Sacramento, California where he studied with Wayne Thiebaud. Thiebaud invited Scholder to join him, along with Greg Kondos and Peter Vandenberg in creating a cooperative gallery in Sacramento. Scholders first show received an exceptional review.

Scholders next one man exhibition was at the Crocker Art Museum in Sacramento. His work was being shown throughout the region, including the Palace of Legion of Honor in San Francisco. Upon graduation, from Sacramento State University, where he studied with Tarmo Pasto and Raymond Witt, Scholder was invited to participate in the Rockefeller Indian Art Project at the University of Arizona in 1961. Scholder is one-quarter Luseino, a California Mission tribe. He met Cherokee designer, Lloyd Kiva New and studied with Hopi jeweler, Charles Loloma.

After receiving a John Hay Whitney Fellowship, Scholder moved to Tucson and became a graduate assistant in the Fine Arts Department where he studied with Andrew Rush and Charles Littler. There, he met artists Max Cole, John Heric and Bruce McGrew. After graduating with an MFA Degree in 1964, Scholder accepted the position of instructor in Advanced Painting and Contemporary Art History at the newly formed Institute of American Indians Arts in Santa Fe, New Mexico.

Scholder has always worked in series of paintings. In 1967, his new series on the Native American, depicting the "real Indian, " became an immediate controversy. Scholder was the first to paint Indians with American Flags, beer cans, and cats. His target was the loaded national cliché and guilt of the dominant culture. Scholder did not grow up as an Indian and his unique perspective could not be denied.

In 1969 and traveled to Europe and North Africa. In 1970, Tamarind Institute moved from Los Angeles to Albuquerque. Scholder was invited by Tamarind to do the first major project, a suite of lithographs, INDIANS FOREVER. It was the beginning of a large body of work in that medium for the artist. SCHOLDER / INDIANS was published by Northland Press, the first book on Scholders work.

In the same year, Scholder had his first one-man show at the Lee Nordness Galleries. He had become a major influence for a generation of native American artists. He was invited to lecture at numerous art conferences and universities including Princeton and Dartmouth College.

In 1972 an exhibition of the DARTMOUTH PORTRAITS, opened at Cordier and Ekstrom in New York to favorable reviews. In the same year, Adelyn D. Breeskin of the America Museum of Art of the Smithsonian Institution, visited Scholder and suggested a two-person show of the work of Scholder and one of his former students. The show opened in Washington D. To good reviews and traveled to Romania, Yugoslavia, Berlin and London.

Scholder was invited to have a one man show at the Basil V International Art Fair in Switzerland in 1974. After Basel, Scholder traveled to Egypt and painted the Sphinx and pyramids. In 1975, Scholder did his first etchings at El Dorado Press in Berkeley, California. That same year a film documentary on his work was shown on PBS and a book of his lithographs was released by New York Graphic Society. Scholder discovered monotypes in 1977. His first exhibition of photographs was shown at the Heard Museum in 1978, documented by INDIAN KITSCH, a book published by Northland Press. A miniature book of Scholders poetry was produced by Stinehour Press in 1979. In 1980, Scholder was guest artist at the Oklahoma Art Institute, which resulted in a PBS film documentary, AMERICAN PORTRAIT. His second retrospective opened at the new Tucson Museum of Art in 1981. Scholder drew lithographs at Ediciones Poligrafa in Barcelona and was guest artist at ISOMATA, USC at Idyllwild, California and again at the Oklahoma Arts Institute. In 1982, Scholder acquired a loft in Manhattan. Scholder is named life-time Societaire of the Salon dAutomne and exhibits at the Grand Palais in Paris in 1984. The following year, he is honored with the Golden Plate Award from the The American Academy of Achievement. In 1991, AFTERNOON NAP is published, the first in a series of book projects by Nazraeli Press, Munich. Scholder has five honorary degrees from Ripon College, University of Arizona, Concordia College, The College of Santa Fe and the first honorary degree from the University of Wisconsin, Superior. A humanitarian Award from the 14th Norsk Hostfest follows. In 1994, Leonard Baskin invites Scholder to collaborate on a major book at Gehnenna Press in Massachusetts. He then retreats to the MacDowell Colony in New Hampshire.

The following year, two major shows open. THE PRIVATE WORK OF FRITZ SCHOLDER at the Phoenix Art museum and a year long exhibition: FRITZ SCHOLDER / ICONS & APPARITIONS at the Scottsdale Center for the Arts in Arizona. Scholder begins the MILLENNIUM series and works in London, Paris and Budapest. He produced his first digital book, THOUGHTS AT NIGHT, in 2000.

In October, 2001 a major exhibition of paintings and sculpture regarding death and skulls titled, LAST PORTRAITS, at the Tweed Museum of Art, University of Minnesota, opened in Duluth. In March 2002, Chiaroscuro Galleries in Scottsdale opened a major show titled ORCHIDS AND OTHER FLOWERS, Scholders Reaction to 9/11. Scholder is the 2002 Arizona Governors Award recipient. It has not been evaluated or appraised.

The item "RARE Antique signed FRITZ SCHOLDER New Mexico Native American PAINTING Santa Fe" is in sale since Monday, July 6, 2020. This item is in the category "Art\Paintings". The seller is "illuminatedtreasures" and is located in Aurora, Colorado. This item can be shipped worldwide.
blanketsiouxpawndollamericanknifepipestonerarefinetomahawknativesilvernecklace19thbraceletleatherweavingheadsterlingindianplainscoastnorthwestturquoiseantiquebeadedlargeoriginalmoccasinsbowlnavajoearlyvintagebasket