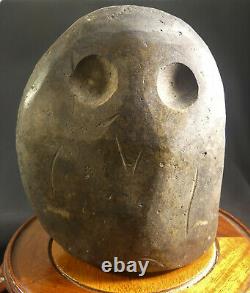 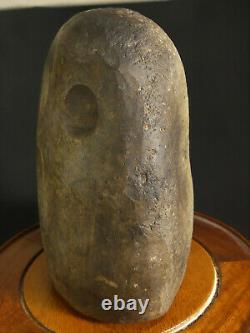 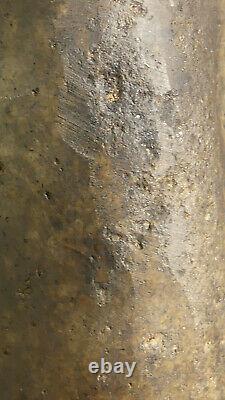 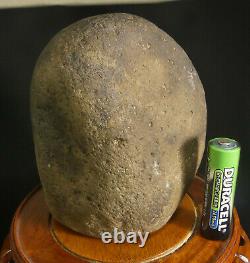 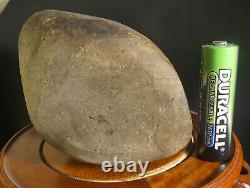 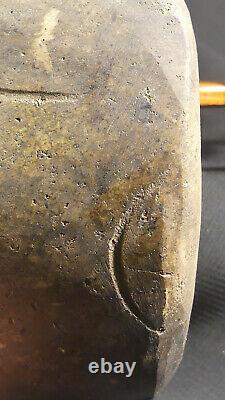 This is an opportunity to legally own an ancient Native American Shamans statue that is estimated to be about at least 500 years-old. Southeastern Ceremonial Complex (formerly the Southern Cult). Is the name given to the regional stylistic similarity of artifacts, iconography, ceremonies, and mythology of the Mississippian culture that coincided with their adoption of maize agriculture and chiefdom-level complex social organization from 1200 to 1650 CE.

East of Little Rock, Arkansas. Near Scott, which is an unincorporated community and census-designated place (CDP) in Lonoke and Pulaski counties in the central part of the U.

About five miles south of this 19. Century find, is one of the largest Woodland (around 650 AD or so) native American mound sites in the lower Mississippi River Valley. Now part of a state park, it is believed thousands of ancient Americans lived and practiced special Sun God ceremonies here. This artifact was reportedly a surface find in the late 19. Century a few miles southeast of a place called the Scott Settlement (east of Little Rock, Arkansas) back in the late 1800s, this curious stone effigy was uncovered during field work.

There are some blackened areas on the artifact that clearly suggest it has been in a fire centuries agoyou can still smell the burned residue on the Owl. It possibly served as a sacred idol in one of their temples or as a personal part of one Shamans ritual paraphernalia. It has an abraded, flat base that makes the Owl stand on a flat surface around a sacred fire. This Death Owl effigy has several pictographs pecked and in some cases painted onto its surface.

These pictographs would have been made by the individual Shaman that owned this powerful relic. The images are very faint (such as a painted animal with horns) and in many other cases the petroglyphs are undecipherable, but it is possible to see themespecially under low magnification. There is a straight row of about 7 pictographs that is 2 (53 mm) long on Owls right edge that appears to have been painted on with thick, pain probably once red, that has turn back in the intense heat of a hot fire. Shaman use of an Owl effigy like this stone one would grant the powerful Shaman Priests the ability to transform themselves and fly into the mystical spirit world to seek answers to Earthly questions and then to return safely to Earth. The owl symbolized the transformation of the soul of the deceased to rebirth and immortality in the Upper World and not in the lower World of Disorder.

The Owl was also symbolized the warrior class as they could defeat their enemies by attacking in the dead of night. This ancient, Native American stone effigy of a perched Owl represented the Spirit Animal of some Shaman.

It also symbolized death in the Middle Mississippian Cultures Lower World that was in constant mythical conflict with the deities of the two worlds that were part of the universe control controlled by the omnipotent Sun God. Owl effigies like this one represented guardian deities that would prevent Evil Spirits from entering sacred temples, dance circles, or the homes of the tribal Chief or the Shaman. There was a great emphasis on death and reincarnation since the rebirth of the Sun each day was crucial to the continuation of life. Only the righteous and good could pass the Sun Gods scrutiny and enter the Land of Delights. The leader of each tribe was thought to have direct linage to the Sun God and thus each chief was a semi-divine being whose rule was absolute, but who was nevertheless under strict obligation to perform ritual procedures that guaranteed the continuation of the tribe. Among these obligations was the observation of the Sun at both its rising and setting. These sacred rituals were performed at temples by the Chiefs (known as Werowances) and Holy Men/Shaman Priests (called Quioughcosughes). These shaman priests were not dependent on just the sanctioning visions and dreams experiences that other Native American tribes in North America utilized, but instead had to receive their instruction in the precise enactment of the sacred rituals to the Sun God. Using these divine powers, shaman claimed to posses the power to heal illnesses and disease, the power of clairvoyance, to see into the future, and to influence the weather and predict victory in war over their enemies.

Shaman who visited the Upper World in their astral journeys with the benefit of their Owl Spirit Animal, could rely on the Owl for advice and guidance on worldly issues. Shaman functioned as High Priests in these Eastern tribes and had to learn the shamanic language that was spoken in tongues that had long been forgotten. Their archaic words linked them to a mythical past in a world in which animals and humans had spoken a common language. In this world, using the language of the shamans, deities such as Rattlesnake, Turkey Buzzard, and Owl could impart their infinite wisdom and also give guidance to the people on the manner in which they should conduct themselves in the Earthly World. Southeastern mythology details several such animal/bird gods who were able to pass on shamanic power.

Thus, Southeastern Shaman controlled the reins of power overly recognized by the Chiefs. If they failed, whether in individual cures or in their higher obligations as guardians of the sacred fires in the temples that represented the Sun God, they would be put to death. The identity of the tribe and of the people was dependent on shamans acting responsibly in every action they didtheir lives depended on it. Although the exact function of this remarkable Owl effigy can no longer be determined, this Owl effigy with pictographic characters on it suggest that it was used by shaman to in their astral contacts with their spirit animals/birdsin this case, the night owl. The owl could also be a sign of one of the clans in a tribe that usually were the name of an animal, reptile, or bird.

This amulet may also represent the mythical conflict between the deities of the Upper World, which was often represented by the Thunderbird and those of the Lower World, represented in this case by the Owl. The Great Serpents, the powerful Denizens of the Underworld, were described as powerful beings who were in constant antagonism with the forces of the Upper World, usually represented by the Thunderers (Birdmen or Falcon beings). Although Shaman/Priests were careful of these beings, they could also be the source of great power.

Birds of prey feature prominently in shamanic belief, since they are swift, courageous, noiseless, and deadly efficient. All these qualities are those sought by shaman in their contacts with adversarial spirit powers, as well as being essential to a warrior class. The owls ability to see at night made it the perfect spirit bird for warriors to be able to see and defeat their enemies at night. Shaman use of an Owl effigy like this stone one would also grant the shaman the ability to transform himself and fly into the spirit world.

OWLS & NATIVE AMERICAN CULTURE. In most Native American tribes, owls are a symbol of death. Hearing owls hooting was considered an unlucky omen. In some tribes, owls were associated with ghosts and evil spirits, and the bony circles around an owl's eyes are said to be made up of the fingernails of ghosts. Sometimes owls are said to carry messages from beyond the grave or deliver supernatural warnings to people who have broken tribal taboos. Birds play a wide variety of roles in Native American mythology.

Frequently they serve as messengers from the Sun Creator, or between humans and the Spirit World. Owls were thought to symbolize: wisdom, silent and swift mobility to hunt at night, the ability to see all things normally, and a true creature of the night. Formed from rather dense stone, this museum quality artifact shows two, large, deep, drilled holes that represent the Owls eyes, as well as incised lines running down the front of the stone that represent the owls beak, feathers, curved lines for feet, and other characteristics. The rear of the artifact has a noticeable raised area that perhaps shows the owls closed feathers. On the left edge of the Owl there appears to be at least seven pictographic characters that have been pecked and etched into the stone.

Seven was a sacred number for the Native Americans that were part of the Middle Mississippian Culture. The owl was thought of as the spirit animal representation of the dead who had been unable to find rest in the Upper World and were condemned to the Lower World until they repented their sins. Animal Totems that also included supernatural creatures of mythology and legend all had a special meaning, characteristic and significance. Animal Totems are Animal Spirits that can be called upon, by an individual or a tribe, for its special powers to serve as a guardian or protector when facing adversity. Shamanism in North America, Norman B.

Arkansas Archeological Survey , Ann M. The AA Battery & Stand are NOT part of the sale. Each object I sell is professionally researched and compared with similar objects in the collections of the finest museums in the world. When in doubt, I have worked with dozens of subject matter experts to determine the condition and authenticity of numerous antiquities and antiques. All sales are Final, unless I have seriously misrepresented this item!

Please look at the macro photos carefully as they are part of the description. Member of the Authentic Artifact Collectors Association (AACA) & the Archaeological Institute of America (AIA). The item "Native American Arkansas Shaman/Priest 4 Stone Death Owl Effigy withPetroglyphs" is in sale since Thursday, September 17, 2020. This item is in the category "Collectibles\Cultures & Ethnicities\Native American\ US\Pre-1600\Artifacts".

The seller is "houghton-usa" and is located in Sequim, Washington. This item can be shipped to United States, Canada.