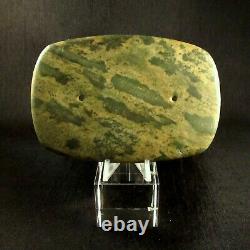 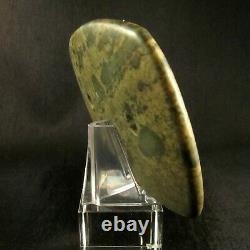 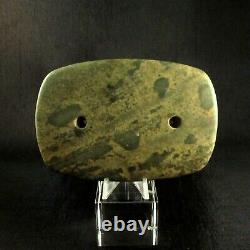 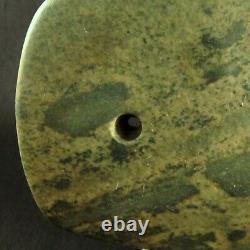 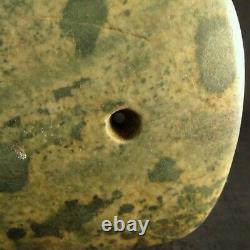 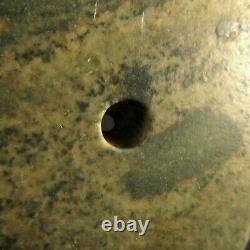 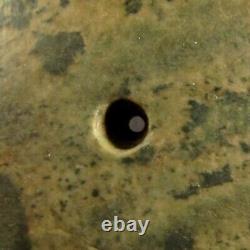 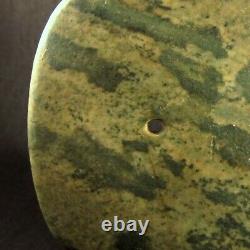 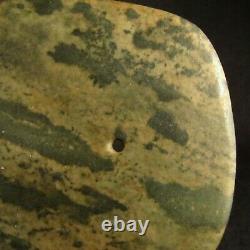 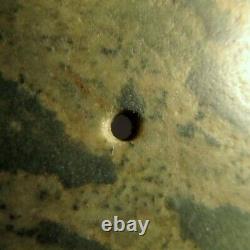 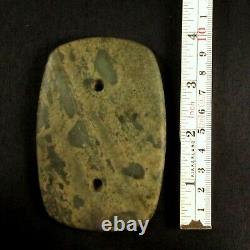 We specialize in picking artifacts from the finest private collections from around the globe. Our mandate is to keep history alive by ensuring these precious items get passed along to a new generation of collectors. Kanawha Valley near Charleston, West Virginia.

For sale is this beautiful Adena stone gorget. A gorget is a decorative or protective polished stone piece, worn around the throat or chest.

This is a very nice example carved from a really gorgeous piece of serpentine stone. The piece originates from a private U. Collection and was purportedly to be found at an Adena site in the Kanawha Valley near Charleston, West Virginia. The piece had been buried for a very long time and has a wonderful ancient patina and absolutely no signs of modern tooling. The various cultures collectively termed "Mound Builders" were inhabitants of North America who, during a 5,000-year period, constructed various styles of earthen mounds for religious, ceremonial, burial, and elite residential purposes.

These included the pre-Columbian cultures of the Archaic period, Woodland period (Calusa culture, Adena and Hopewell cultures), and Mississippian period; dating from roughly 3500 BCE (the construction of Watson Brake) to the 16th century CE, and living in regions of the Great Lakes, the Ohio River Valley, and the Mississippi River valley and its tributary waters. It is important to emphasize that the Adena culture is not the name of any American Indian tribe.

We do not know what these people might have called themselves, or how they defined their societal or cultural groups. "Adena culture" is a term of archaeological convenience that encompasses similarities in artifact style, architecture, and other cultural practices that distinguish the Adena culture from earlier and later cultures in the region. Since the Adena Mound site exemplified all the significant features of the culture, it became the type site and the name of the site was applied to the entire culture.

Through research, we know the Adena people were hunter-gatherers, but also began domesticating various crops, such as squash, sunflower, sumpweed, goosefoot, knotweed, maygrass, and tobacco. These people lived in small villages near their gardens, but likely moved frequently as they followed animal herds and other food sources, such as nuts, which supplemented the harvest from their gardens. In addition to undertaking small-scale horticultural production, the Adena were also the first people to produce clay pottery in Ohio, which is characterized by large, thick-walled vessels that were likely used to cook ground seeds into an oatmeal-like substance. The Adena cemented their ties to particular regions by burying their dead in prominent mounds that archaeologists believe may have served as territorial markers. Sometimes the mounds were accompanied by small, circular earthen enclosures that may have surrounded ritual spaces. The Miamisburg Mound in Montgomery County, Ohio, is the largest example of an Adena burial mound in the state. Based on the archaeology conducted at the time, we know that Adena burial mounds contained multiple burials and these individuals were usually accompanied with funerary objects such as bracelets, ear spools, gorgets, or large ornaments worn around the neck, and bone or stone tools. Deceased individuals were either cremated or laid on their backs in timber-lined tombs. Ancient Origins Boutique stands by all of our picks and always try and provide the best information possible, based on the information we are provided with from the original collector. As always we offer a full. On all items we sell..

We guarantee the authenticity of each piece for life. Questions are always welcome and if your looking for more items similar to what we offer, please ask.

We constantly have new pieces arriving and don't always have time to put everything up. The item "Authentic Native American Mound Builder Adena Gorget" is in sale since Sunday, October 25, 2020. This item is in the category "Collectibles\Cultures & Ethnicities\Native American\ US\Pre-1600\Artifacts". The seller is "ancientoriginsboutique" and is located in Winnipeg, Manitoba.