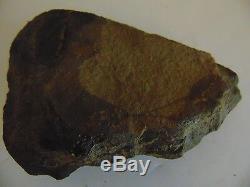 This stone tool could be used to make wooden bowls and other objects. It is made of granite, and measures four and one half inches long and three inches wide. When you hold it, you can feel the natural wear from its many years of use. The form of a stone axe was created by pecking with a hard hammerstone. Began to appear early in the. Archaic period, made from hard igneous or metamorphic rocks. Cobbles with small shallow cupped.