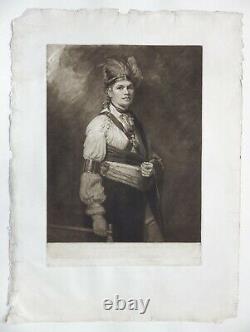 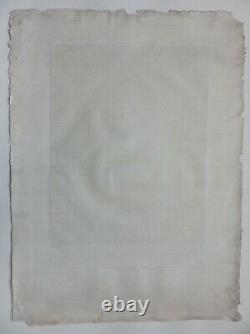 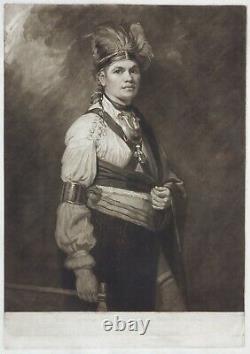 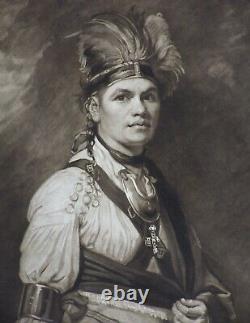 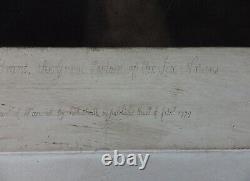 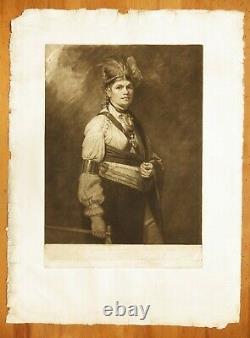 Joseph Tayadaneega called the Brant. The Great Captain of the Six Nations.

Engraved from an Original Painting of G. Romney in the Collection of the Right Hon'ble the. Earl of Warwick by J. Smith & publish'd the 10th of feb-y 1779.

Discolouration and small repaired tears to very edge of sheet. Sheet a little buckled to centre.

Nov 24, 1807, was a Mohawk leader and. The primary chief of the Iroquois Confederacy of Six Nations based in present-day New York. And was closely associated with Great Britain during & after the American Revolution. The American Revolutionary War (1775-83) he rallied support for the British among several. Tribes in the Iroquois Confederacy, which became divided between U.

Led Mohawk and colonial Loyalists known as "Brant's Volunteers" against the rebels in a bitter. Partisan war on the New York frontier. He fought in numerous battles, including the French. And Indian War (1754-63), the Battle of Oriskany (1777), and the Battle of Fallen Timbers.

In 1775-6 he visited Britain to reaffirm Iroquois alliances with the English at the time of the. American Revolution and to gain assurances from colonial administrators and the British.

Crown that their promises of protection would not be forgotten once their campaigns in. He met many of the most significant Anglo-American people of. The age, including both George Washington and King George III. Haldimand granted Joseph Brant and his followers a land treaty to replace what they had lost.

In New York State at the Sandusky Council after the Revolution. Grant, was about 810,000 hectares in size, covering the Grand River area in what is now. Southwestern Ontario from the source to the mouth of the river and 9.6 kilometres deep on.

The grant was later rescinded. Chief Brant relocated with most of his people to.

Upper Canada to the area which is now Six Nations Reserve, where he remained a. George Romney's diary records his meetings with Brant to paint his portrait; the March 29. 1776 entry notes,'The Indian at 9'; and that of April 4,'The Indian Chief at 9. Brant is the height of American Indian delegation portraits, depicting the great Mohawk chief.

In a three-quarter pose, wearing a combination of western and native dress. Blanket drapes his left shoulder and arm, while the right sleeve of his ruffled blouse includes a. Silver arm band and a decorative metal chain. In his right hand, Brant holds a pipe tomahawk. A silver gorget with a pendant cross engraved with a royal coat of arms. Hangs from his neck and he wears a feathered headpiece. Of State for America, arranged to have this print version of the Romney portrait engraved by. John Raphael Smith, and gave Brant a box of the prints as a gift. Now resides in the National Gallery, Canada, attesting to its importance. Please do not hesitate to contact me should you have any questions. Welsh Bridge Books & Collectables is a bricks and mortar shop located alongside the River Severn at Shrewsbury, in a beautiful 16th Century building housing three floors of interesting and eclectic books and collectables for sale. If you're in Shropshire please pop by and say hello! The item "ANTIQUE 18th CENTURY ENGRAVINGNATIVE AMERICAN INDIAN CHIEF JOSEPH TAYADANEEGA" is in sale since Wednesday, March 25, 2020.

This item is in the category "Art\Art Prints". The seller is "welsh-bridge-books-and-collectables" and is located in Shrewsbury. This item can be shipped to North, South, or Latin America, all countries in Europe, all countries in continental Asia, Australia.